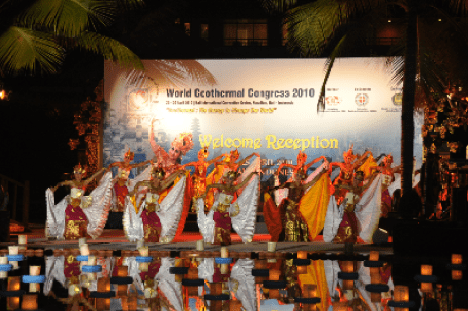 Introduction
Geothermal, the energy to change the World: this was the motto of the last World Geothermal Congress that took place in Nusa Dua, Bali, Indonesia from April 25 to 30, 2010. The event was convened by the International Geothermal Association (IGA) and co-convened by the Indonesian Geothermal Association (INAGA). Ranked third among geothermal power producers and with its huge potential, Indonesia is today the best country to present the state of the art in geothermal energy. Moreover, the attractive island of Bali and the stunning International Convention Centre in Nusa Dua were the natural place to organize such event.

Programme
The organizing committee and the IGA steering committee did an outstanding job in preparing the congress and, from the participants’ point of view, the whole programme ran efficiently and smoothly. The programme itself was composed of the following main events: the Opening session, the 130 Technical sessions and the Closing ceremony with the signature of the Bali
Declaration. The social events were marked by a friendly Welcome reception, a spectacular Indonesian cultural night
and a hot Farewell party! If we compare some statistics from WGC 2000 and 2005 with the last one, Bali was the congress of all the
records. Similarly, when comparing the status of geothermal development at the period of those last three milestones,
one can say that Bali was the witness of a strong geothermal restart. As in other large international gatherings, new contacts
were made , agreements were signed and new collaborations were built for the sake of geothermal energy. Moreover, two panel discussions were held – on the international effort to attract investment in geothermal energy, and on the international perspective to support geothermal development in Indonesia.

Trends
Looking at the relative numbers of papers in the 40 topics proposed during the 130 technical sessions, it is interesting to see where the main efforts are centred. Actually, eight out of 40 topics represent precisely 50% of all the proceedings papers (Table 3).
It appears that indirect and surface methods (geophysics, geochemistry and geology) are still very important in the exploration and management of geothermal resources and reservoirs. Numerous papers about exploration show how active is the quest for new resources. Moreover, never before in a congress have so many papers and sessions been focused on Enhanced Geothermal Systems (EGS). Although for the last five years numerous projects have been in progress on several continents, major difficulties linked to drilling and to reservoir stimulation have retarded the development of this technology. As a result, only two small pilot plants are
under exploitation today (at Soultz-sous-Forêts, France, and Landau, Germany, both located in the Rhine graben).
Among many interesting and important projects, one stands out particularly: the exploration for supercritical fluids, namely the striking Icelandic Deep Drilling Project (IDDP). The aim of the project is to exploit supercritical fluid at a depth of 4-5 km and a temperature of 400- 600°C. At a given flow rate, the amount of power generated with such a fluid would be twice that of a classical high temperature geothermal field. After a first drilling attempt, a 2.1 km well in the Krafla geothermal field (NE-Iceland) had unfortunately to be stopped after a body of molten magma was encountered. The project will continue with the drilling of new wells on other sites.

Final remarks
WCC 2010 was definitely a great event in a very friendly atmosphere. The excellent planning and organization were a decisive point. But above all, the handling and review of over 1000 papers by the Technical Programme Committee and their implementation on the IGA database, as well as the preparation of the proceedings CD is to my view the one key-element for developing geothermal energy during the next five years, by allowing professionals to be informed of the latest results and experiences worldwide until WGC 2015 in Melbourne.